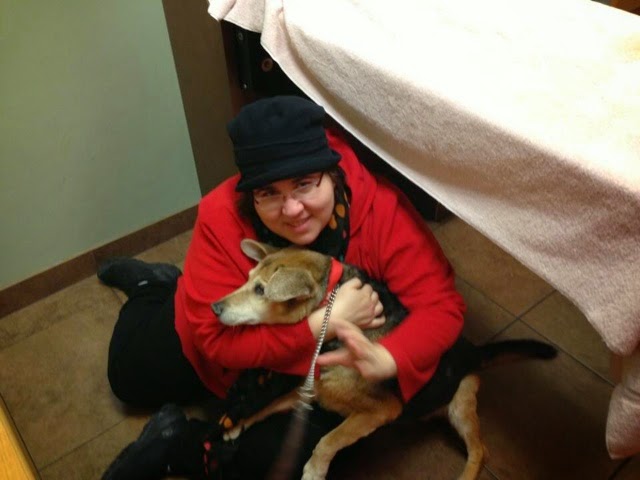 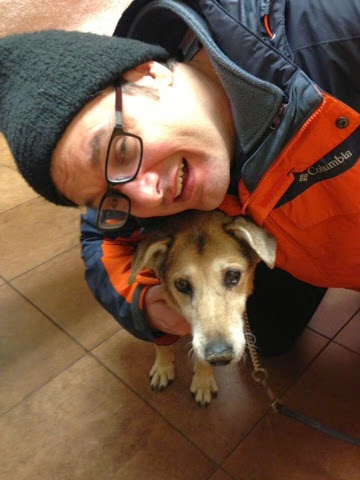 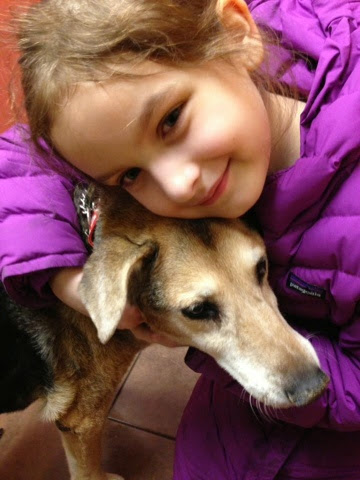 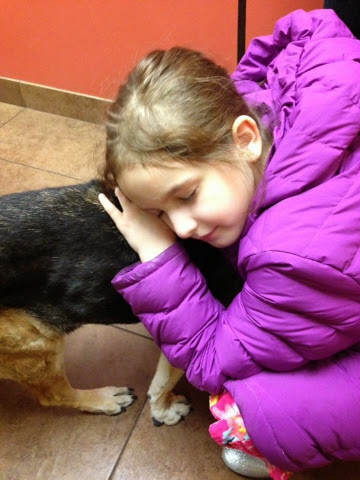 In the lobby, EJ cried for awhile. I cried for awhile. Had she wanted to stay in the room, we would have insisted, but she seemed relieved that her dad was taking care of this, and she could just be in the lobby to weep and be held. The techs gave her a tiny baggy for her newly-lost tooth. She said thank you, wiped her tears, then focused her attention on a wall of photos of pets and their owners, vets with the pets, etc. She started to smile at the cuteness. Ten minutes later, Mike came out, followed by the vet. We all gave each other hugs, the vet included—you could tell it was hard on him, too, as he loved our old girl. It was done.
In the end, there was no sign from our dog, and I am grateful to all those friends out there who called, emailed, and posted messages to me via social networking who expressed variations of, "your pet may not give you a sign."  Our own judgement made the call, and I know it was right. I actually wished we'd done it sooner the moment it was done, knowing how long that poor dog had kept going, likely in pain, definitely in discomfort.
We went out for hamburgers at Five Guys on our way home. EJ was relieved that she could chew again without her loose tooth. While eating, we got calls from family and friends who had seen our messages about Ada.  A family friend who we hadn't seen in a long time came in, and made us smile, saying, "The only cure for this is getting another dog, you know!" EJ entertained the toddler at the table next to us, playing peek-a-boo and dancing around between the tables to make her giggle.
Everything happening felt very alive, and I could feel myself starting to remember the younger, livelier Ada, the Ada we hadn't seen in years. It made me cry and smile at the same time.
Within a matter of days, our realtor was at our house with a professional photographer, taking photos of our place for our online listing, and our condo was on the market. In the photos, there is little evidence that a dog ever lived there—let's face it, in perfectly neat/staged photos, there is almost no evidence that anyone lives there—although we did keep her leash hook up in our pantry, for no other reason than to make us smile. Since Ada passed away, we have had showings at our house, as well as open houses (one is going on at our place as I type this at a café a few blocks away.) While Ada was the friendliest dog we'd ever met with people, and likely would have been energized by strangers visiting, I cannot imagine a scenario in which she could have been able to handle this without disruption. Selfishly, I'm grateful that we don't have to worry about the messes she was making regularly at the end of her life, and that we don't have to find places for her to hang out during showings. Practically and emotionally, physically and spiritually, her time was the right time.
Now, as April wraps up, we hope for a buyer for our condo. We hope for a new beginning soon. We hope for excitement and adventure and comfort and setting down roots, all at once. There will be no new dog for awhile, but once we know more about where we will be, there will be another. There will always be Miss Ada, though, named after Ada Lovelace (a genius one-of-a-kind gal, whose ideas and discoveries out-lasted her short time on earth), right there in the foundation of it all, forever after.
Posted by Kori at 9:19 AM 3 comments:

A lot of people—basically all the people—are asking me, now that our condo will be on the market this week,

"Where are you moving?"

That is a perfectly appropriate question. You'd imagine we'd have a quick answer. I'd love it if we knew, really.

In reality, we have narrowed down our options to three areas. We have investigated them, done home searches (or are doing home searches), and have contacted friends in each area. Since Mike can live anywhere for his job—thank you, fantastic distributed company—we are focusing our location investigation on my job prospects. We are figuring it out.

If you want to know why determining big things, like where to put down roots, are so daunting for our little family of three, here's an everyday example that just happened—I'm typing this with my wet hair wrapped in a towel.

Me: Taking a shower, on a Saturday, mid-day, oh the luxury
The hubby and kiddo: Making lunch.

Me: (Stepping out of shower, concerned): What is going on?

Hubby: (Outside door) Forget it, can I just come into the bathroom to talk to you?

Hubby: (Stepping inside, letting all the steamy, warm air out) Can we open the new box of salad?

Hubby: We have a half-opened container of spinach leaves, so can we open the new box of salad greens, or can we only have the spinach that is open?

Me: What do you want to eat?

Me: Open the salad greens. Why are you asking me this? Was this a necessary crisis to have me called out of the shower?

I've joked with my husband many times that his last name is actually French for, "let's think this through just a little longer," while my maiden name in Italian is, "let's get going already."

I promise we'll figure out where we are living very, very soon. We are almost there. It is painfully slow for me, so no need to ask. It feels like lightning speed to the hubs, who suggested just this morning that "we really should do more research." That's the beauty of selling the house, though: we must move, so we will.

In the meantime, spinach and lettuce are open and available for lunch here at our house. Stop on by!