We aren't the courageous parents this week.

Our daughter started her ISAT testing this morning.

For those not following the school-testing drama throughout the country, it has reached a new level of craziness here in Chicago. The ISAT, a retired standardized test being replaced with an entirely new common-core assessment next year, is still being administered for the next two weeks to Chicago's 3rd-8th grade students, despite the fact that the results from it will not be used to assess anything in 2014.

Why? Parents are being told that it is legally required (not true). They are also being told a whole host of other things that span from "it is illegal for you (parents/guardians) to opt your children out" to "you can opt out with by sending a note as the a parent/guardian, but your kid will be given the test booklet and the directions, anyway, and they have to personally refuse, again."

Yeah, that's the dream, everyone, to send your kid to school with a note of test-exemption, then have to coach them on how to verbally refuse when given the test every morning for two weeks, confronted with the implication of law-breaking. Could you imagine doing that at eight years old?

Years ago, before kindergarten, when we were touring selective admission public schools in our area, we emphatically eliminated a really well-loved, well-respected school from our list after we heard the principal tell us that, she "[doesn't] contact parents for every infraction, because that would usurp [her] authority over them—in the line of authority, [she] needs to be at the top." NOPE, WRONG ANSWER. Of course, contacting parents for every single problem is ridiculous—we had no beef with her logic there—and of course, it is important for kids to respect the administration and staff's authority. Duh. The idea, though, that a principal's authority over my kid—anyone's kid—is not an extension of parental authority, is ridiculous. The principal has authority because it is ceded over to him or her when a child is enrolled in school; a great principal can help inspire and shape a child's behavior, administer effective consequences, and command respect, but is never expected to be the ultimate authority in a child's life.

We didn't pick that school, because that seemed nuts. We picked the school our kid is at now, because the whole staff is much more tuned in to kids' needs, as well as how parents/teachers/kids/staff can all work together. Unfortunately, though, even our well-liked school is part of a big system, and the big system's rhetoric about testing seems to support the ethos we rejected early on: the schools are in charge of this, you parents may be invited to help out (and definitely to donate financially!), but don't get your place in the hierarchy confused. CPS = the ultimate alpha dog.

So much good stuff is being written to debunk the need for ISAT testing, and to showcase the importance of fighting it. Chicago Public Fools provides must-read information that highlights the fallacies behind many of the schools' claims about the necessity of testing. More Than a Score has the data and the toolkit for opting out, to make it easier for parents and kids. Linda Lutton at WBEZ is doing some incredible reporting on education, as always, highlighting the opt-out protest from an unbiased perspective. And of course, if you want to hear the party line from CPS, you can always check out the Chicago Tribune.

While we are completely onboard with the ISAT testing protest: we believe in it, we understand its importance, we recognize that it sends a message to the Chicago Public Schools which is making them take notice (and go a little nuts, honestly), we had several long conversations with the kiddo about where we stand, and we decided that allowing her to test this week and next is the right decision for her.

The problem we encountered is this one: the opt out FOR HER is too late. I'm not speaking of any other child, nor am I saying that we couldn't have just said, "Sorry, kid, this is not a democracy, and we know this will be hard for you, but we are making an important stand." At her school, in her classroom, the test prep has gone on for three weeks. She wants to see it through. She was in tears talking about what it would feel like not to take the test. No amount of us assuring her that it DOES NOT MATTER AT ALL, that her teacher and school would not be hurt by it, that her own achievement does not hinge on this, made it feel okay to her. She understands, factually, that all these things are true; what is hard is that the campaign has already been waged, the teachers are saying things that are different than us, and the whole feel of the room is "let's all work together and do our best on these ISATs."

In a perfect world, we would have opted out of all the test prep, too, all the test-endoctrination, all the "rah-rah, we can do it." How does one do that, practically, when test-prep becomes main thrust of learning for three weeks? If the kids are not going to receive instruction while sitting out the actual test, what kind of teaching would they receive if they were not a part of the classroom prep?

Yesterday, EJ got up and made a "Quiet, ISAT" sign. For fun. To be helpful. This morning, as the test begins for her class, she loaded up number two pencils and peppermints (more on that below). She told us how they were instructed that, once they are done, they can't pull out a book to read, they just have to check their answers over and over for each 55-minute period, until the tests are collected. We told her that checking things over too many times can actually make you second-guess correct answers, so once she feels like she is sure she answered things as best she can, she can stop, even if there is time left. We then reminded her of the most important rule: no one can control her mind, and she can sit and daydream about anything she likes, whenever she likes. She then said, "Yes, and I can turn the pages of the test once and awhile, to look like I'm still checking things over, even if I'm done." YES YOU CAN.

This pains us. We feel like we have let our daughter down, and now we are letting the school reform movement down. This is not the Mardi Gras spirit for which we were hoping; of course, staying up late and partying is particularly verboten when there is testing at stake, testing that (again) will not count in any tangible way for the school, the teachers, the administrators, or the kids---are the kids ever a factor mix in this equation, though?

In some small way, the kid is winning for the next two weeks. Below you will find the list of suggestions from the school administration for better testing, along with the telltale, "ISAT results are a key factor in our school's performance level." Again, THEY ARE NOT. Notice below, though, how testing is actually now a way in which the kiddo is happier with school:

I know, the only way to end testing is to protest testing.

I'm sorry, friends who care so much about our kids, and are working so hard to make this protest effective.

Sometimes, in a broken culture, in a difficult system, for your own kid's best interest, peppermints win the day, especially when she carefully labels the bag herself. 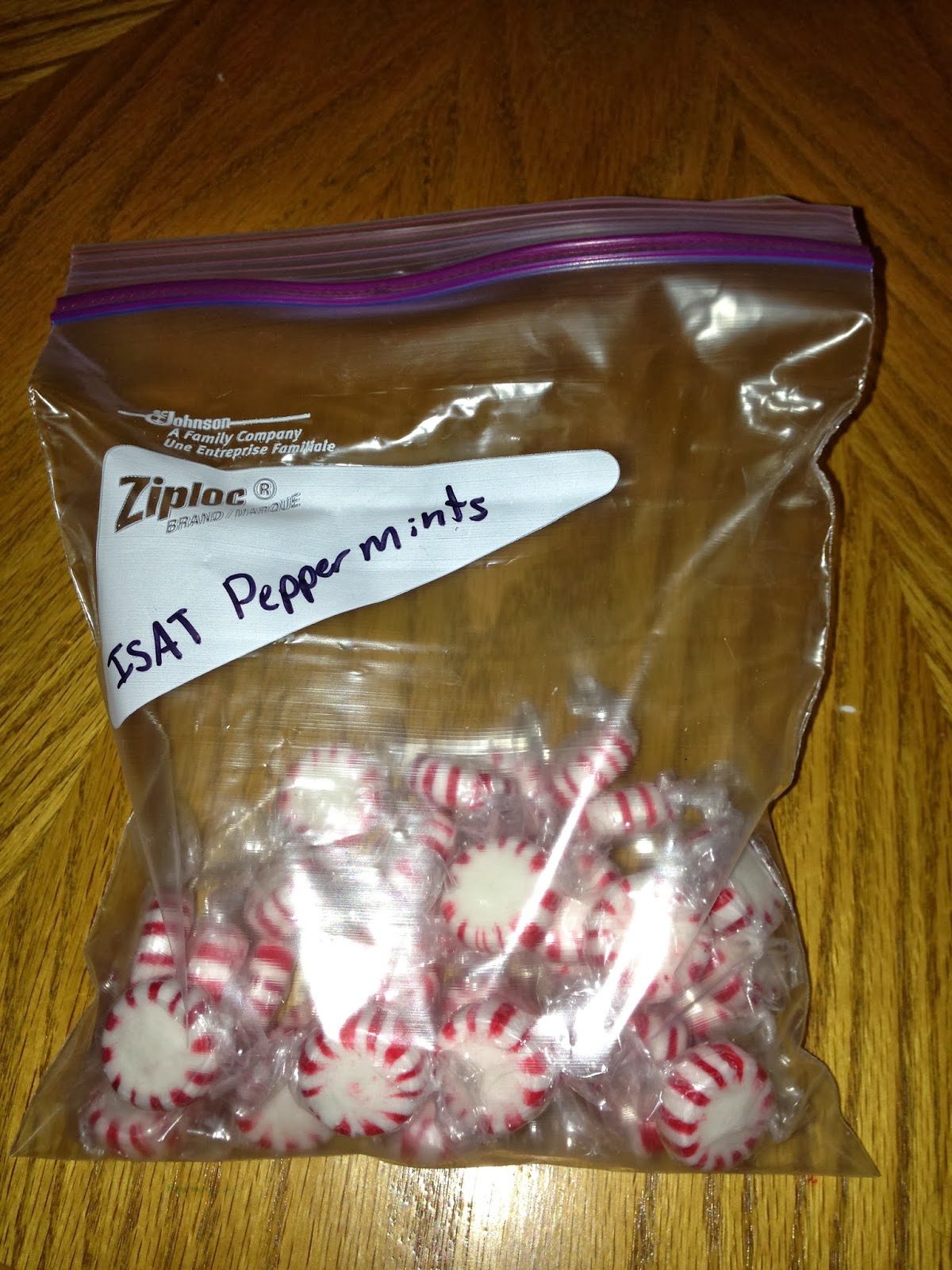