Last night, before going to bed, EJ decided that instead of straightening up her room (as I had asked) or putting away her homework (again, me with the asking/her with the "forgetting I asked"), she was going to write a letter to Santa.

You know, on December 19th. In the evening. On the eve of the last day of school for the year, at which point she would be on winter break and with me almost every moment, watching closely for Christmas gift-related subterfuge. On the same day that I had come home just a few hours before, happy with my definitive triumph of that "one last, big exciting thing" that I had helped Santa to secure.

At the fancy whiz-bot technology store (you may know the one), I took a picture of an item I thought EJ would really love, then texted it to St. Nick. He instantly appeared, disguised as a store clerk, and after we exchanged holiday greetings, I told him, "Yes, I know this is pricey, but she really earned it, and we can help to defray the cost if you and the elves can't cover it." He was so appreciative, saying, "Thank you, Kori! The recession hit the North Pole very hard—we invested heavily in real estate, and now we are underwater on condo developments on both poles—and since I insist on providing affordable health care for all my elves (instead of forcing them to work part-time with no benefits), every little bit helps."

Okay, he didn't say that, but he did take my money, then jiggled like jelly and magically disappeared just as quickly as he had arrived, with me holding the (pricey) receipt.

Yes, it was on my day of holiday hubris—remember parents, NEVER BE SMUG—that EJ wrote this little gem to Santa Claus: 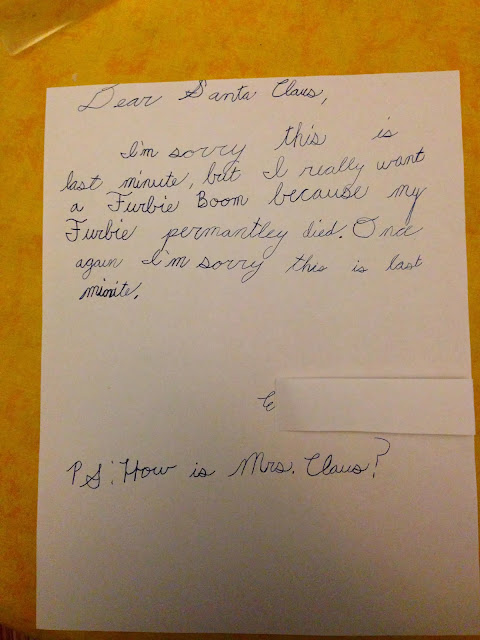 Okay, A+ for manners, apologizing twice for the lateness. And hey, look at that cursive! She taught cursive writing to herself with a book her godmother gave her, and it looks pretty sharp. Creativity points also go out to her for changing the end of the word Furby to Furbie to match her own. But I must protest: A FURBY BOOM? Have you seen these things? Worse yet, have you heard them?

She mentions to Santa that her Furby permanently died, which is smart, because it plays on both his practical and his sympathetic sides. It also might put the hubby and I on his naughty list, because...well, let's just say we didn't work very hard at reviving the Furby she received last year. This toy/instrument of parental torture was so insidious that it needed to be housed in its own basket, deep in the closet, so that it could not be touched/nudged/breathed upon in anyway, lest it awaken by shrieking in loneliness, then break into evil laughter that scared our child to the point of tears. (Oh yes, she adored it through her sobs and her pleading with us, "Please make it stop laughing at me like that, it is so scary! It looks like it wants to hurt me.")

So, to sum up: a) the kid only wants one thing from Santa, b) Santa has all her gifts covered and was unaware of this request, and c) this is the only gift EJ's parents expressly asked Santa to leave off the sleigh, because we aren't particularly partial to toys that spring to life to give our daughter the evil eye.

If I were to be Santa's ghost writer—and I'm not, I'm just being hypothetical here—I think I might have to reply,

Thank you for your thoughtful letter. It is never too late to write to Santa, but of course, promptness is appreciated.

I know that you would really like a Furby Boom—I understand, because they are covered in pink hearts, and like to talk and be snuggled—but unfortunately, we have had an outbreak of boomistis hit the North Pole, affecting toys with the word 'Boom' in their name. The Furby Booms are okay—please don't worry about them—but if they touch a child under the age of 10, that child gets a sudden and devastating case of the naughties, making them unable to receive any presents from me.

Your mom and dad have reported that you have been a real joy this year, and I would hate for a case of acute boomitis to ruin your Christmas. As such, please accept the other gifts we made for you. One of them was picked out by Mrs. Claus with you in mind—can you guess which one? She was so touched that you asked about her in your letter, and sends her warmest thoughts on this chilly night.

One last thing: if you find out that one of your friends has received a Furby Boom from me, rest assured that he or she is not at risk for the naughties—at least not through their Furby Boom—as I must have fulfilled their Christmas wish order before the boomitis outbreak. All Furby Booms being delivered for Christmas 2013 are guaranteed to be perfectly safe, as they were placed in sealed gift bags on my sleigh prior to the onset of the disease. I'm sorry I was not able to get a healthy Furby Boom for you this Christmas, but we are confident that by next year, our medicine of gingerbread-flavored tea mixed with powerful anti-virals will do the trick.

Ho ho ho! Be a good girl this year, and remember, whatever you do: DO NOT GET A NEW FURBY BOOM!

PS: There is a rumor that boomitis can affect grandparents, too, making them unable to spoil their grandchildren. Make sure to tell all of your grandparents not to play with or purchase Furby Booms, either."