A lot of folks have been asking me lately about our dog, Ada, namely, is she dead yet?

No, no one has been that indelicate, crass, or thoughtless, I promise. I know that's the real question, though, being asked by people who love us and love her, typically said with a tilted head, and voice pitched from high-to-low in a soft-spoken, "How is she?" Even if you are asking online, I'm guessing your head is tilted in that "Awh" pose we humans do so instinctively.

I can't blame you, friends. I know what readers here might be thinking, something like, "Geez, Kori, you told us back in November that your sweet old-lady dog was dying, and we got really sad and supportive and in the thick of things with you, and now, here we are in January, and…well…what gives?"

What can I say? Our dog is a punk.

This is not news to anyone who has met her—she has always been sweet, but determined, friendly, but independent, part of the pack, but not one to give up her stance easily. She is, even in the slow haul to death, faking us out and giving us the runaround, all while being gentle, affectionate, and adorable, just to keep us appeased.

Things were looking really, really dire right before Christmas. Ada had rallied over Thanksgiving, as I reported here, and was comforted by an occasional pop tart from her indulgent owners. We had gotten our hopes up, but then she began losing weight quickly again, having trouble eating/keeping food down, and sneezing a lot in a face-contorting way, occasionally spraying blood all around like she was auditioning for the lead role in an all-dog production of Stephen King's, "Carrie." During the weekend EJ was performing in her dance school's staging of "The Nutcracker," Ada gave all of us a show, too, including my visiting parents, as a clot in her nose set her sneezing, leaving our living room, hallway, and bathroom looking like the site of a massacre.  All of these symptoms are consistent with our vet's hunch that she has a nasal tumor—look up "canine nasal tumor" on a web browser, and find yourself reading through comforting gems like this, "Nasal Tumors—A Slow and Insidious Killer."  There's a word you never want used to describe a medical condition: insidious.

This author also said slow, though, and we weren't so sure she was right on that front. We almost hoped she wasn't, given how wretched watching our pet suffer had become. After the bloodiest, no-food-for 48 hours span mid-December, we were sure that Ada's final trip to the vet would be that week. We prepped EJ. We took pictures of them together. We got ourselves as prepared as we could be, crying like big sobbing messes. 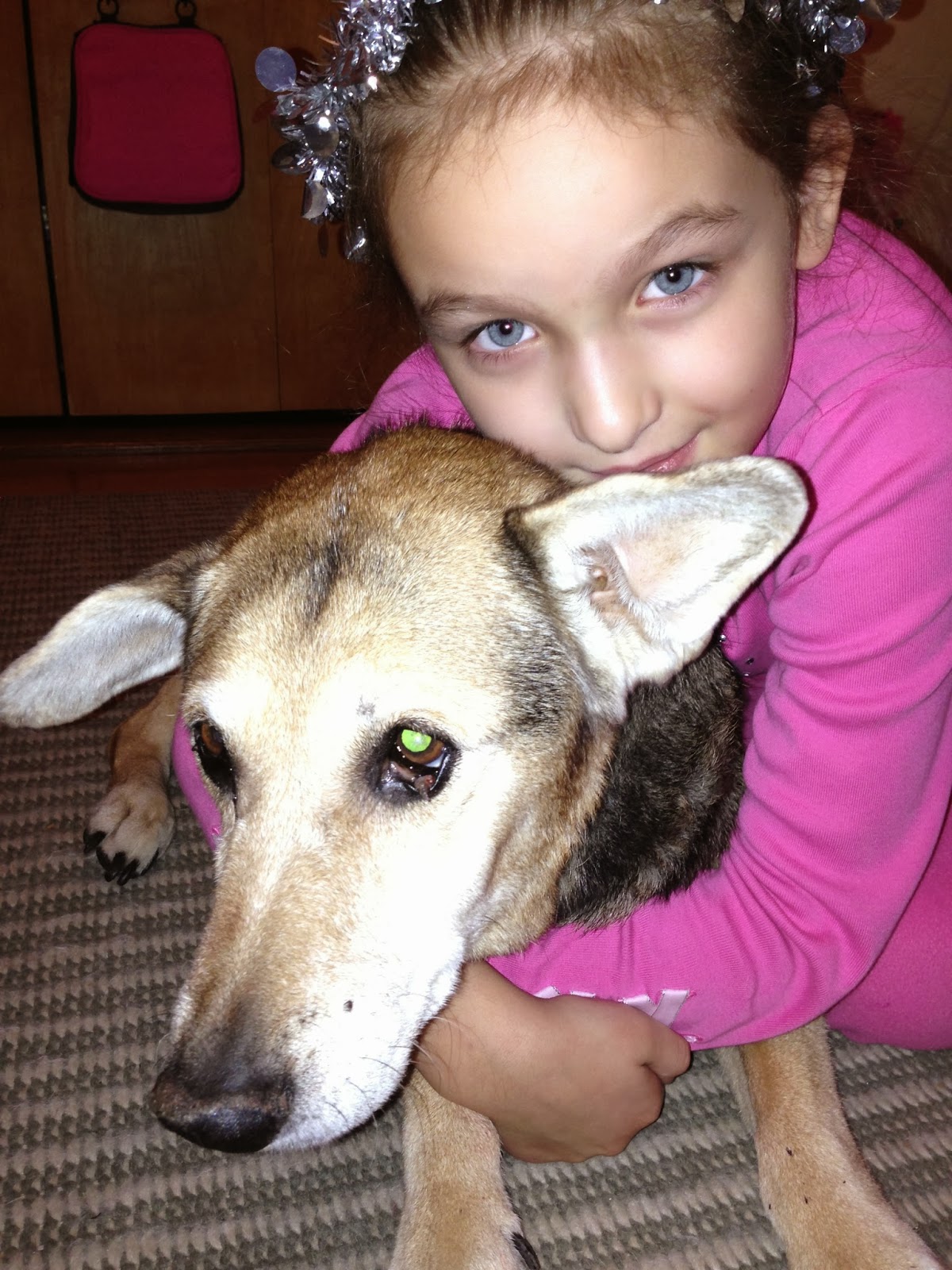 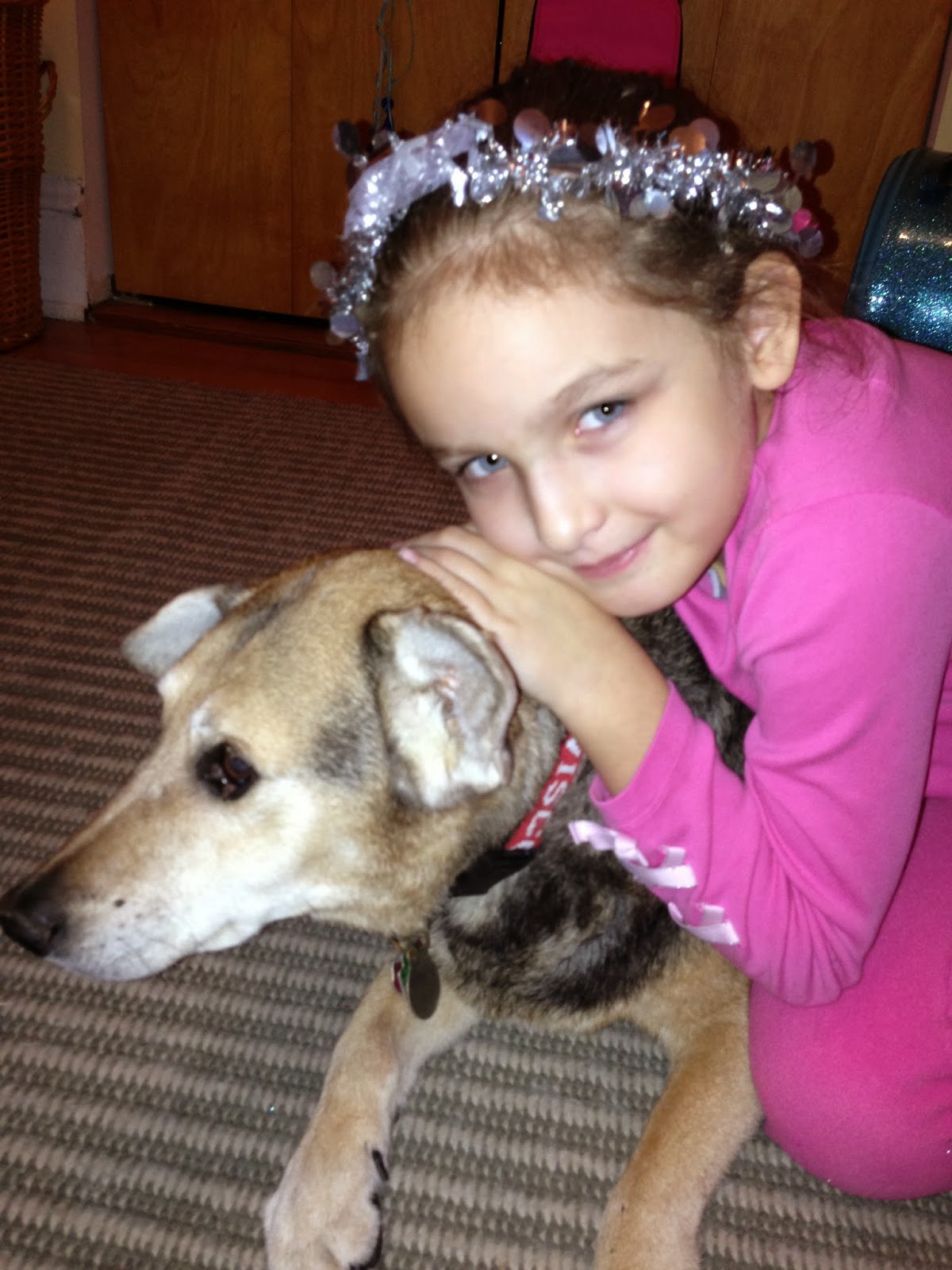 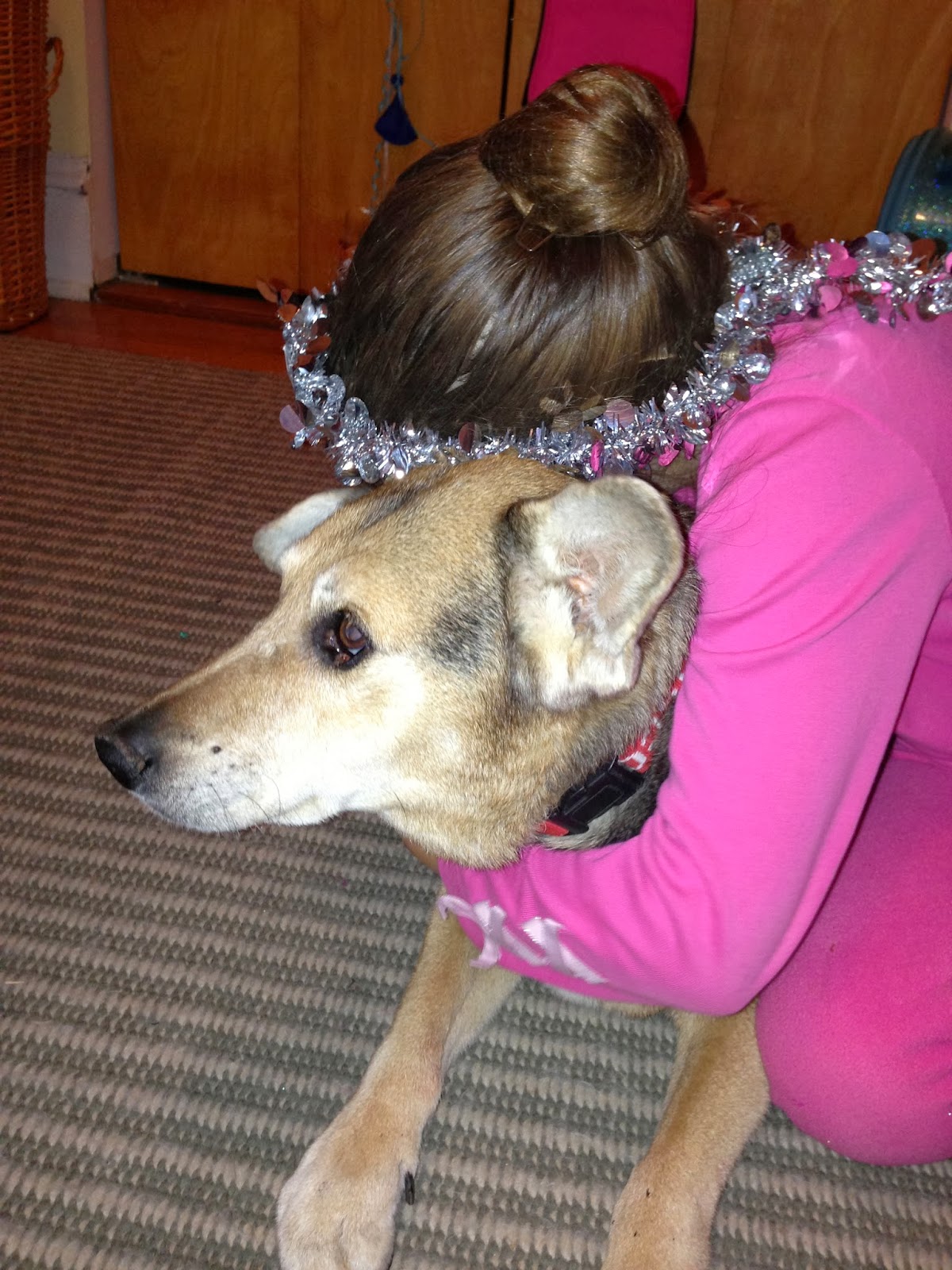 The vet told us, "You'll know when it is time, come in when you know." We didn't know if this was a relief or a burden—what if we don't know, if we never know, and we have to decide, anyway? Once a dog is at least fifteen years old and counting, there isn't a whole lot of life left to miss out on, but still, you never want to say goodbye sooner than necessary, right?

We became more and more grateful that Ada was making the choice easy for us, even as we were sad that she was sick, and then, guess what?

Maybe she was inspired to go alpha when needing to compete for the food that my parents' dog eats while we were visiting them over Christmas. Maybe it was seeing her family all together, and getting lots of pets and snuggles from her whole extended pack. Maybe it was just that, after weeks of medication, her stomach really did feel better, and her nose was actually a little clearer. We have no idea what tipped the scales for her in a positive direction, but we liked it, so we didn't question it. We bought her some of the food she likes to eat while at my parents' place in Wisconsin for our home, and she started eating regularly. We noticed she was more spry going up and down the stairs. We laughed at how silly we were thinking she was dying just a week before.

Over New Year's, Ada really became more like her old self, albeit a grandmother version of that self. We had house guests, and EJ was excited to pull out her trundle bed for our kid guests to sleep on. By night number two, all the kids were crowded in EJ's bed, and the trundle was taken by old lady dog.

Seeing how much comfort she took in that bed, and knowing that once winter break was done, we'd have to put it away, I purchased a dog bed for her. I know, I know, the dog is fifteen, she's never liked dog beds, why on earth would I spend money on one? I'm a sucker, okay, a sucker for the old lady dog. She stayed true to form, though, flat-out refusing to sleep on a dog bed, even though one had been purchased especially for her and her sore elderly joints. Grandma Ada doesn't care about my whims or my budget, she sleeps where she wants. No amount of bribing or treats would make her place a paw on that dog bed, although she did eventually acquiesce to sleep next to it, as if it were her own personal canine body pillow, but only if it was placed on the trundle. Don't believe what a diva she is? Here's photographic evidence:

I am nothing if not determined, and even at her sweet old age, that kind of stubbornness demanded my attention. "You will be comfortable, dog! You will sleep on a dog bed that I get you because I love you! You will be spoiled!" ran through my head. My head is a little nutty, I'll admit.

I returned the offending dog bed this past week, and bought another that is very flat, with an orthopedic, "egg crate" foam, encased in a soft barf-and-blood resistant cover. I think it is actually meant to go in the bottom of a crate, but I thought it might be good for Ada just thrown on the floor. I didn't give up, and guess what? I won the battle of wills. HA!

So, that's the update. Is all well? No, not really. Grandma dog has stopped eating her dinner reliably every night, sometimes just picking at it, even though it is the "good" food. Her digestion is getting all wonky again, and my hubby and I are regularly having the chicken-and-egg discussion, "Is her digestion messed up because she isn't eating all her food, or is she not eating all her food because her digestion is messed up?" The sneeze—the horrible, insidious sneeze—seems to be picking up, too, although so far, not with a trail of gory blood spray following behind. She's heading in and out of the yuck, and we just have to play it by year.

It's not her time yet, but time could be called this month, this week, or tomorrow, even, depending on how all her symptoms conspire together on any given day. For now, who wouldn't love having this sweet sleepy-headed face around, right? Yeah, that's what we think, too. 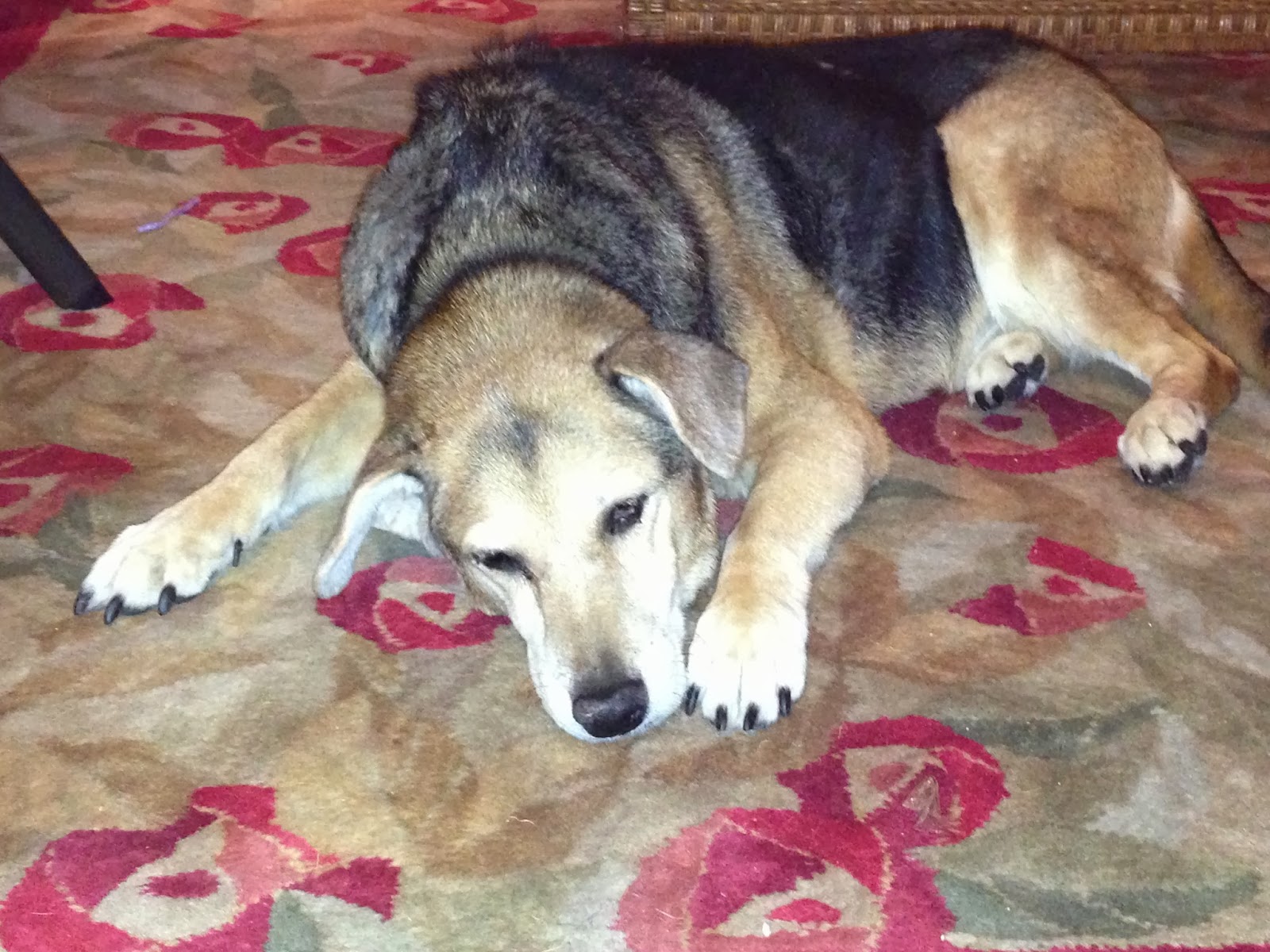