Hey, everyone! It's November 1st! You know what that means?

1) We are all in a sugar coma.
2) Our kids are alternately hyper, then grumpy, then hyper again.
3) It's National Blog Posting Month (#NaBloPoMo)

I'm going to try to write on this blog every single day this month, even when I am no longer fueled by tiny boxes of Nerds I picked out of my daughter's candy bin. You read that correctly, EVERY SINGLE DAY. Because of what is going on in my life right now, a lot of my writing may center upon my current search for a provider for a self-pay laparoscopic vertical sleeve gastrectomy. Of course, it might not. I may just tell you what I make for dinner, and how angry I am that it is getting cold. All bets are off with a daily deadline.

I'm also—hopefully—going to figure out how to video blog this month, as a personal goal, to break up some of the writing, and to experiment in the hope of being prepared to document my gastric surgery pre- and post-op. As I have been doing my own research, videos posted with real accounts from real patients have been incredibly helpful and inspirational. I'd love to contribute to that community.

Before all that starts, though, I'm going to kick-off today's month of posts with a recap on our Chicago Halloween, or as we will always refer to it, HAILoween 2014 (thank you to my friend, Desirée, for coining that phrase.)

Early in the day yesterday, we realized that what the meteorologists had been warning had indeed come true: our temps had dropped drastically, and we were now, effectively, having a winter day. IT SNOWED, then rained, THEN SNOWED AGAIN. The trees, many still quite green with only hints of fall colors, started getting whipped around by 60 mph gusts. All frozen hell broke loose. I joked that this would be the year of "trick-or-sleeting."

It was one of those days when you just pray you don't need to leave the house, but of course, it was the one day in the fall where roaming around outside is an absolute must. After school, I tried to bribe my fancy witch-clad daughter into just trick-or-treating around our block, and in exchange, I'd take her to the store and buy her whole bags of her favorite candies. She didn't buy in. The hubby and I suited up for the weather—I even tracked down my long underwear—and we convinced the kiddo to wear her winter coat over her costume, much to her chagrin. Instead of walking over to the far corner of our neighborhood, where a street of Victorian homes which survived the Chicago fire becomes the spookiest place on the south side, we drove, parked nearby, and tried to pretend this was all an excellent idea.

Here's a photo of the kiddo, just moments after getting out of the car, ready to hit the first house: 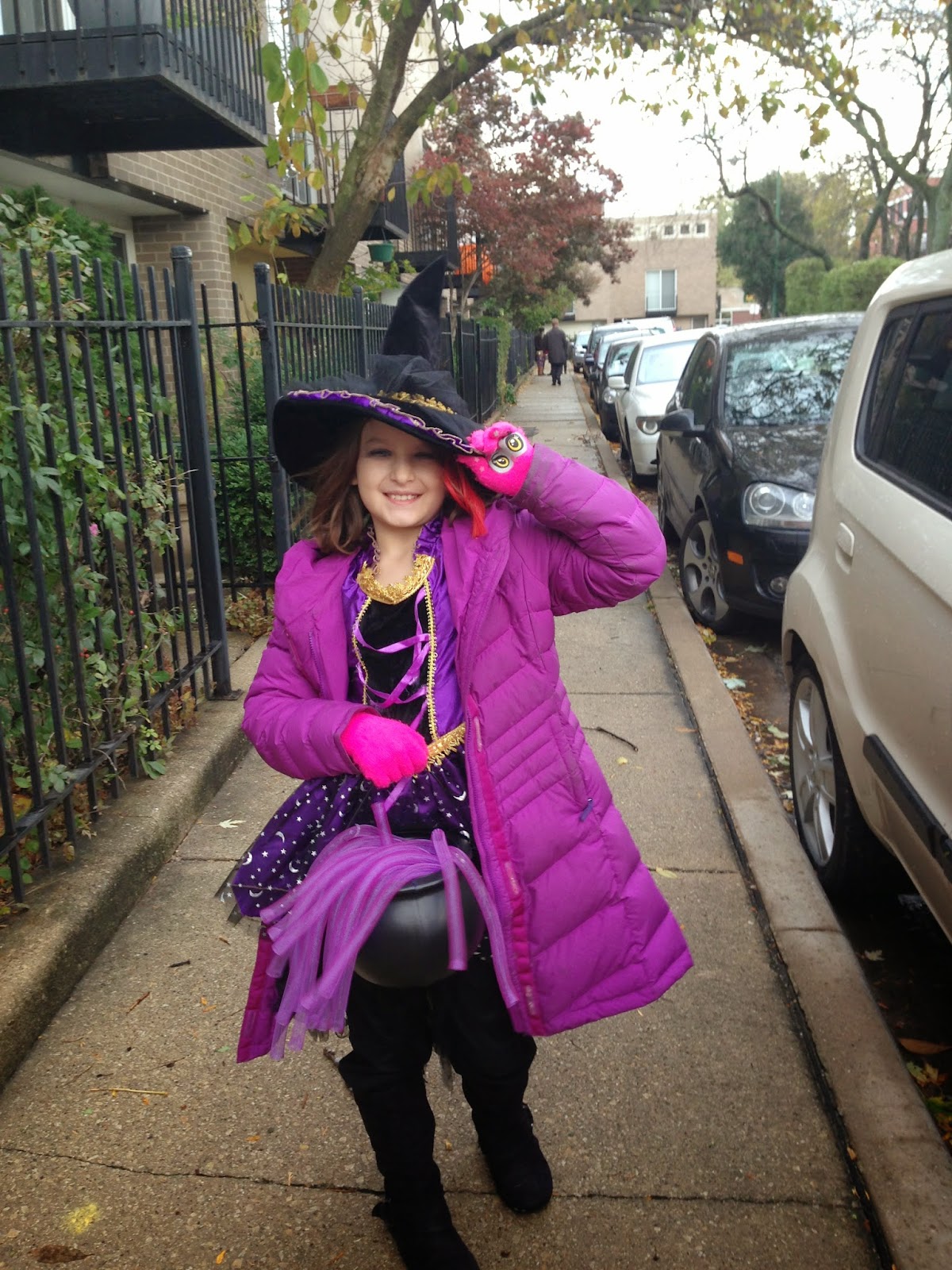 Roughly two minutes after taking this picture, it began hailing. HAILING. It continued for a solid 10 minutes—we'd never seen anything like that before—broke for a few moments, and then came back again over and over for long stretches. Our poor puppy, who our daughter had dressed in a black cat costume, became soaked, with hailstones matted into her schnoodle fur. We picked her up and held her in our coats for much of the night, as the kiddo raced from one house to another, occasionally slipping on ice coming down the wooden Victorian stoops.

You know how sometimes, when things are so outlandishly horrible, you just start hysterically laughing, because, honestly, what else can you do? As we sprinted from house to house with a wet, shaking dog in our coats, ice pellets lashing our faces, we laughed until we thought we would burst. We were at once physically miserable and mentally giddy at the same time. IT WAS HAILING. IT WAS HAILOWEEN.

I tried to capture the chaos, but I couldn't do it justice.

You can hear the frog in my throat as I describe the situation in the video. Did I mention we are all still getting over the three-week cold going around? The poor kiddo, who bulleted through the candy-collecting portion of the evening with aplomb, felt much worse when we were done, even mildly feverish. I know, I know, the weather can't make you sick. You know what, though? Getting pelted with ice and soaked through can't help, either. We decided to skip a much-anticipated Halloween potluck with friends and head home to eat warm stuff, drink hot liquids, and call it a night.

Hailoween, I won't ever forget you. I don't ever want to repeat you, either.
Posted by Kori at 5:42 PM

Email ThisBlogThis!Share to TwitterShare to FacebookShare to Pinterest
Labels: NaBloPoMo