Fun fact of the day: my polling place is the same as the President and First Lady's. It's true! I'm very, very grateful that they vote absentee/early ballot, because waiting on the secret service and press trucks is not how you make voting fast and easy.

Now, if a local elementary school gym is good enough for my neighbors and me to exercise our rights, I'm sure your polling place is probably just as dandy.

Let's face it, midterm elections don't have the same panache as the presidential ones. Some years, and in some places, they seem easy to ignore—that might be where you are at right now. This year in our state, Illinois, a close gubernatorial race has made all media turn to attack ad central, giving us a silver lining no matter who wins: no matter what, the ads stop tomorrow.

(For goodness sake, they even invaded my Hulu time. It's a bad day when online streaming gets a dose of partisan hate, because those commercials can't be easily skipped.)

We don't always make it easy to vote in the United States. Election Day is always on a Tuesday, whereas many other countries hold voting on weekends. There are differing I.D. laws state-to-state, and these change regularly. Sometimes election officials get threatened, then they don't show up.

Liberty, freedom, democracy, independence...none of those things function just as ideas. They only work when they are put into practice. In fact, hearing people simply wax on about those concepts, without them in place for the listeners, is not only insufferable, it can be cruel.

Voting today doesn't mean the politicians are going to get it all right. But we ARE the government, only inasmuch as we pick people to represent our interests, then hold them accountable. If you don't run for office, the only way to practice your principles is to vote for those who do.

Heading out soon, where I'll cast my vote, then pick up my "I Voted" sticker. I'll wear it happily, even if the people whose policies make me feel physically ill win later on. Practice (eventually) makes perfect, right? 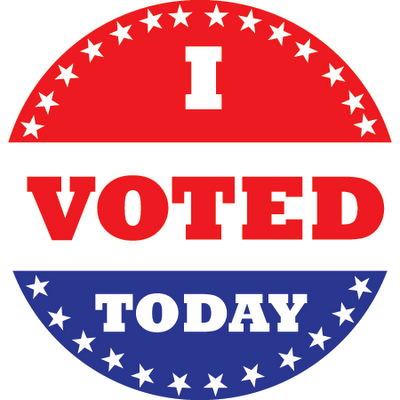 Email ThisBlogThis!Share to TwitterShare to FacebookShare to Pinterest
Labels: NaBloPoMo